So, I’m just going to cut straight to the chase. This week, I got pretty pissed off. Want to know why? Well let me start by giving you a little context.

Over 90 innocent people have perished in Greece as a result of intense bushfires which have plagued Athens. The bodies of 26 people were found in an open field, they were found huddled together, embracing in their final moments. Pretty freakin’ traumatic, right?

Then, the Adelaide Advertiser decides to publish this cartoon. They described it as a ‘poignant tribute.’ 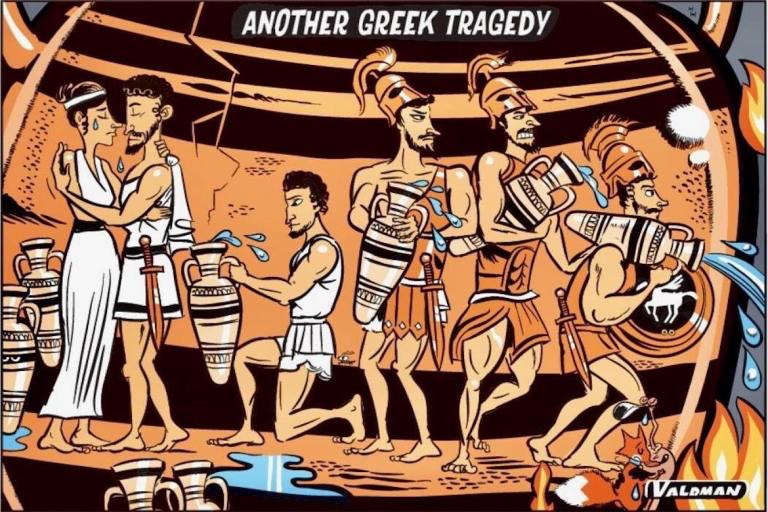 Now personally, as an Australian of Greek descent, I did find this offensive, as did many others.

Whether you find the cartoon offensive or not, it is irrelevant to the onslaught on commentary I then received online, for voicing my opinion on the editor’s poor judgement for letting such a cartoon go to print, given the horrific circumstances surrounding the events.

As many of you are aware, I don’t only run Content Savvy as a copywriter and Instagram marketing strategist. I’m also the editor of Furnishing International Magazine, which entails a great deal of work, writing, research and editorial judgement. The role also requires me to travel overseas to cover exhibitions relating to the industry. Most of the time, I am the only representative from the Australian media who is invited to these events. I understand the Australian media landscape as I not only studied as a journalist, but I am also working within this landscape.

Now don’t get me wrong, mistakes can happen, we are human after all. However as you’ll see from the comments below on the Facebook apology issued by The Advertiser, I expressed an opinion that I believe is fair – that as a fellow editor, I believe that poor judgement was executed in this case.

Cue a couple of comments from the ignorant Iain (since been deleted), and Aaron. 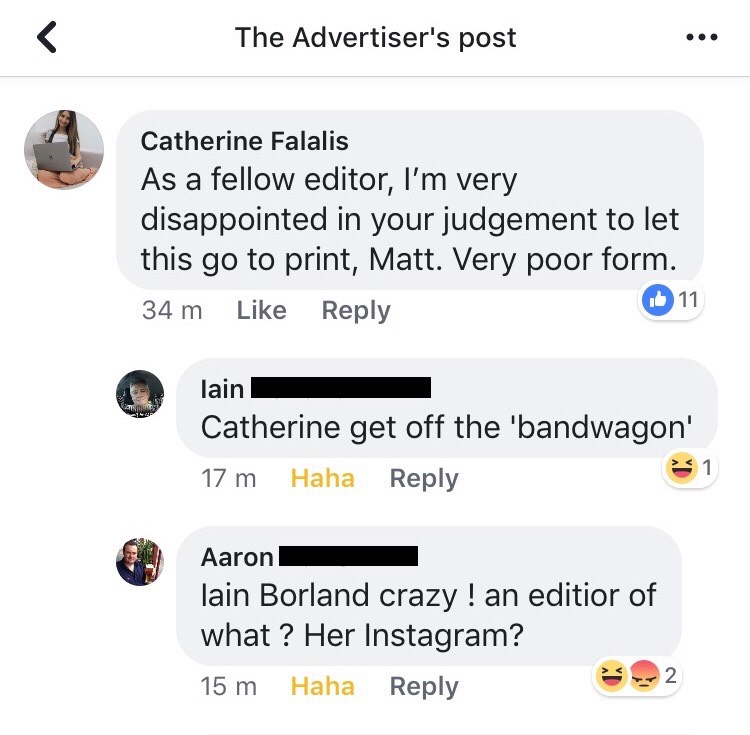 So here was my response: 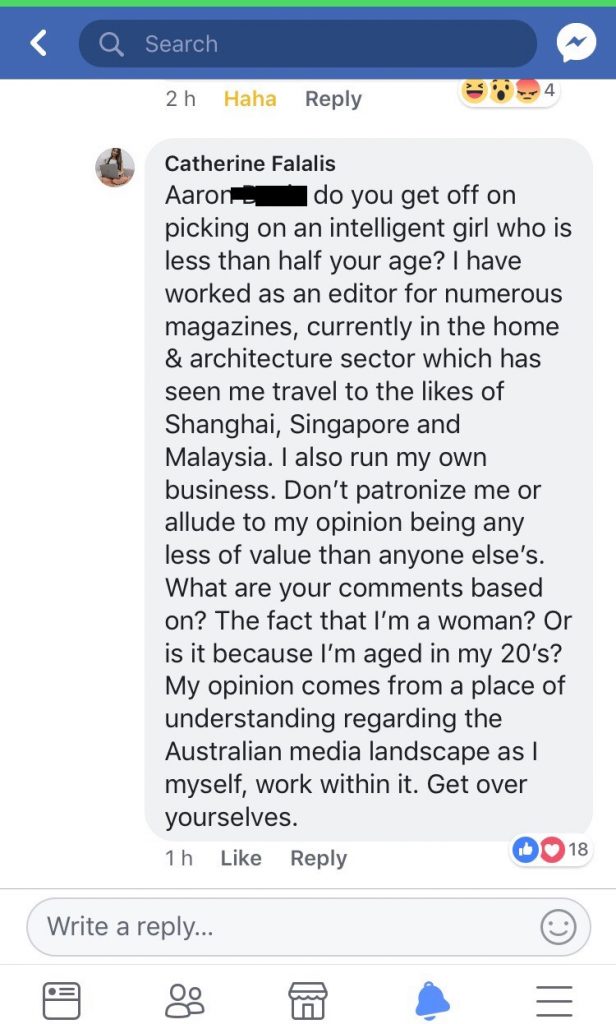 At this point you might be wondering, Cat – why did you take it personally? They don’t even know you!

Fair point … but this is actually quite a sore topic for me. There’s a lot of blood sweat and tears that have brought me to where I am today, which I have no reservations about defending.

I studied for years, undertook numerous unpaid internships, attended interview after interview, and worked as an editor in a mat-leave cover for a magazine company, who let me go as soon as they were done with me. I also worked as a marketing assistant in the tech field in another mat-leave role, and I worked through the struggles of being unable to find secure work within the journalistic field. It is only now, that I am successfully working as an editor in the furnishing sector while running my own business.

I knew I wanted to be a journalist from the age of twelve, and I did everything in my power to go after that dream and achieve it.

I didn’t do all of this for some random to belittle and patronize my credibility, worth and career, just because I voiced an opinion.

So there’s a little into my psyche as to why I feel so strongly about this.

What was Aaron’s comment based on? All he knew of me, based on my Facebook profile is that I’m a female, and that I look young. I just turned 26, but I look more like 16. Is this why he thought I didn’t have a leg to stand on? In Aaron’s mind, I possibly couldn’t be an editor based on these two things, which I repeat, is all he knew of me. I felt like I had the right to ask him what his assumptions were based upon, which is exactly what I did.

Aaron never responded to my comment so I guess we’ll never know.

Kellie and her partner Scott on the other hand, had a lot to say. Although, I’m not too sure why as the matter didn’t concern them. 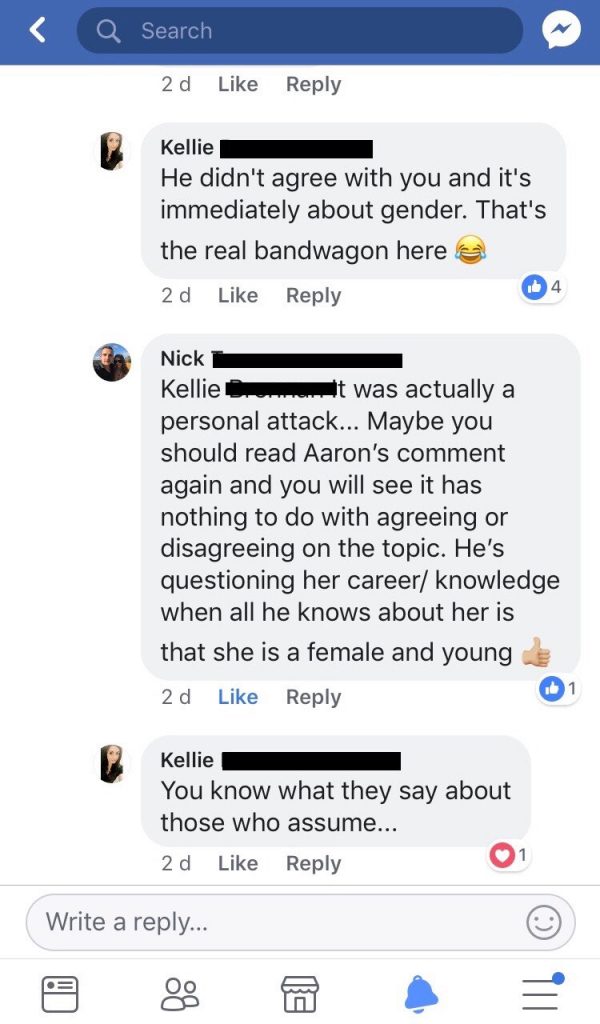 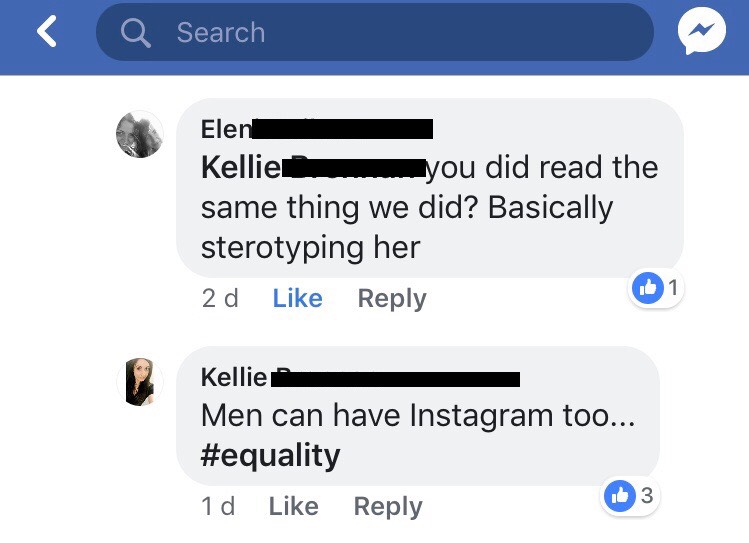 Apparently Kellie mistook my response as me conducting a feminist rant – she thought I was making it about gender, when in actual fact, I was trying to understand the basis of Aaron’s assumptions.

I tried to explain this to Kellie by linking this blog post which greatly explores why Instagram’s demographic is mainly targeted and used by the teenage female audience (which is exactly why Aaron would’ve based his assumption on this), however my explanation fell on deaf ears. 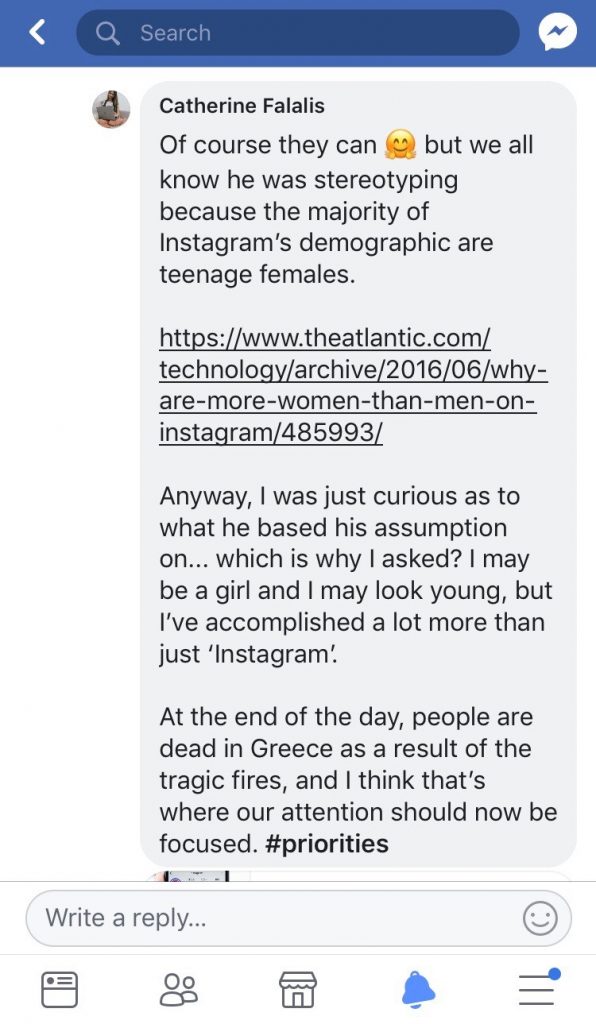 She continued to personally attack me, accusing me of playing the victim and even went to the length of looking up my profile. She seems to think that Content Savvy is based on ‘editing my Instagram account, and others’. Oh Kellie, I wish it were that easy, I’d hardly have any work to do! 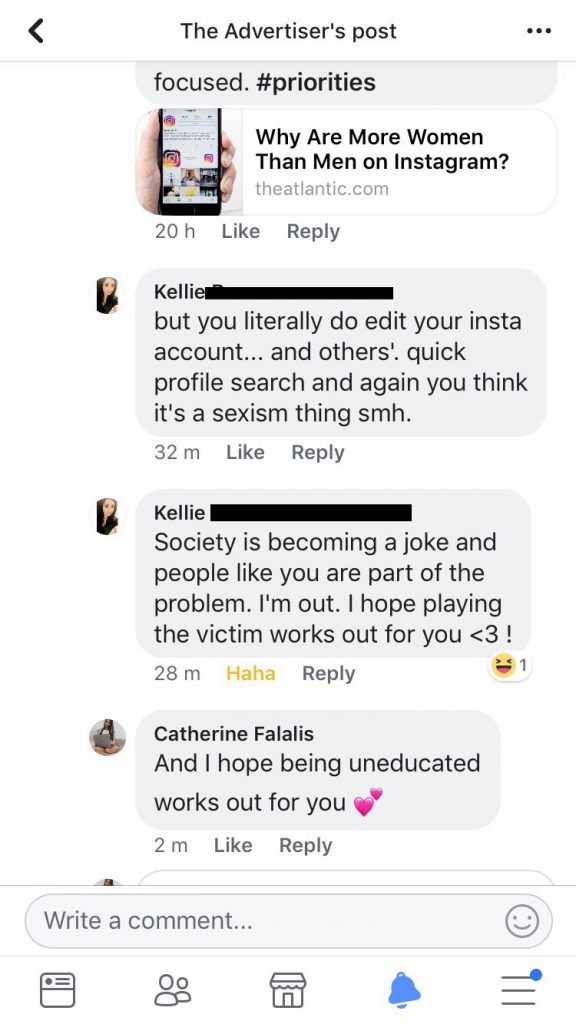 Kellie doesn’t seem well educated on the likes of social media strategy, and the work which goes into growing a successful account. But that’s okay, because many of the social media managers out there who are reading this now will know, and all my clients certainly know.

For me, my worth isn’t just based on maintaining an Instagram account in the same way a teenage girl might… I don’t do things ‘for the likes,’ or the follows, or the vanity. I do it to help me put food on the table, and to help my clients feed their own families.

I don’t consider my responses as playing the victim, quite the opposite actually. I’m defending my worth and credibility and challenging others to question their assumptions.

So here’s the takeaway – don’t let anyone try to bring you down to their level. Keep holding your head high and stand up for yourself when necessary. I’m an introvert, and it’s easy for the quiet voices to get drowned out by the chaos. Pick your battles carefully, and let your voice be heard when needed.

And if you need some help being heard with the written word, get in touch to find out how we can assist in defining your brand voice so your copy can shine online. 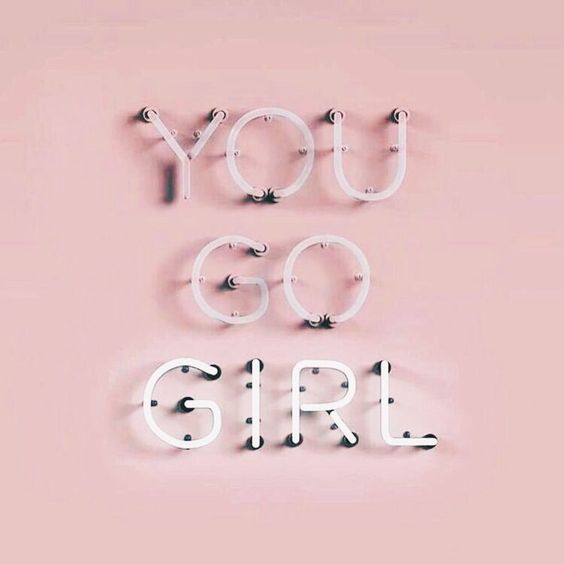